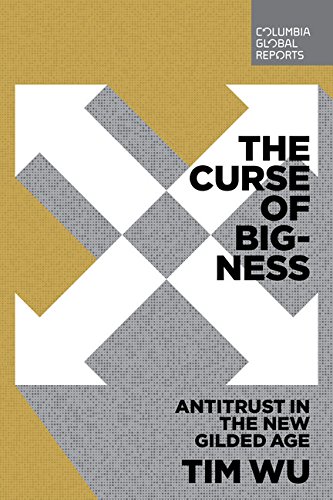 The Curse of Bigness: Antitrust in the New Gilded Age, by Tim Wu

In his new book, The Curse of Bigness, Columbia Law School Professor and EPIC Advisory Board member Tim Wu examines the striking parallels between the Gilded Age of railroads and oil and the “New Gilded Age” of big data. Professor Wu describes the parallels between trusts and tech, exposing the similarities in how companies of both eras wield power and profoundly shape the private lives of individuals through corporate authority.

The short volume explores the roots of antitrust law and pulls the reader through to the heyday of trust-busting under Theodore Roosevelt. Professor Wu makes the past prologue, highlighting Roosevelt’s proclamation that “when aggregated wealth demands what is unfair, its immense power can be met only by the still greater power of the people as a whole.” As Wu shows, the same holds true when aggregated data insists on concessions.

Professor Wu then turns to the development of the “consumer welfare” standard, which hinges on the price benefit of a merger to consumers. Wu shows how that standard—divorced from the original language and intent of antitrust law—fails to account for the many distortions in markets created by concentrated corporate power. In recent years, lax enforcement brought on by this standard has led to significant shortcomings in antitrust law. For instance, both the Facebook-Instagram and Facebook-WhatsApp mergers were approved, despite clear indications of monopolistic intent and pointed concerns about consumer privacy. As Wu wryly notes: “It takes many years of training to reach conclusions this absurd.”

Professor Wu recommends sweeping changes to the legal and intellectual framework of antitrust, including reforming merger review to include “broader and tougher standards” (though he does not linger on specifics), democratizing and introducing transparency into the review process, instigating a new wave of blockbuster cases, breaking up companies that are too large to be tolerated, providing regulators with market tools, and leaving the “consumer welfare” standard behind. Wu is precise but not proscriptive with his recommendations, and leaves policymakers and academics ample room to negotiate specifics within his framework.

Louis Brandeis once remarked that “we may have democracy, or we may have wealth concentrated in the hands of a few, but we can’t have both.” In The Curse of Bigness, Wu demonstrates that data concentrated in the hands of a few proves just as fatal to democracy, and Wu provides a meaningful roadmap for reversing the startling trends of the “new gilded age.”