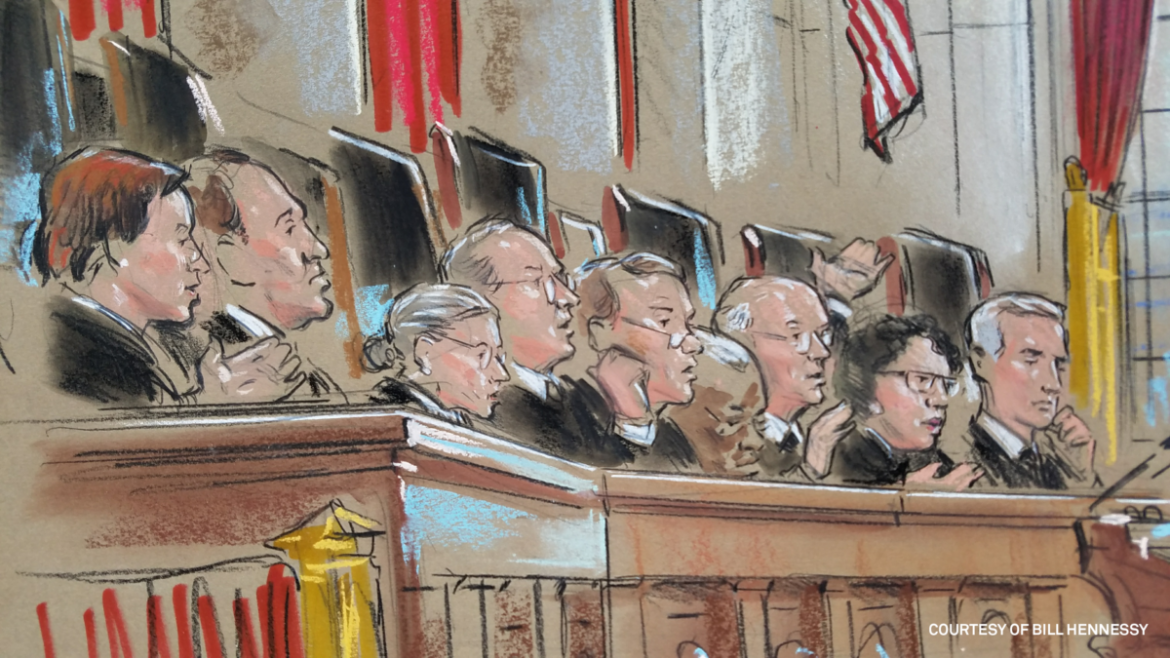 Today the U.S. Supreme Court heard oral argument in Riley v. California and United States v. Wurie, two cases involving the warrantless search of an individual’s cell phone incident to arrest. These cases present an important and fundamental Fourth Amendment question: whether the police can search the entire contents of an individual’s cell phone incident to any lawful arrest. As others have noted today, the Justices seemed to recognize that cell phones and other digital devices create a “new world” that justifies a modified search incident to arrest rule. But the Justices struggled throughout the arguments in both cases to identify a workable rule.

One important practical insight from Orin Kerr is that, given the short time frame for a decision (the case will be decided by mid-June), it is possible the Justices will seek a unified majority author for both the Riley and Wurie opinions. Given that consideration, and the facts and arguments in Wurie, it is possible that an unexpected “middle ground” compromise will emerge focused on the plain view doctrine. But regardless of the particular majority approach, it seems very unlikely that the Justices will endorse the broad categorical rule that all individuals’ cell phones are subject to limitless search incident to arrest. And if the Court can’t agree on a compromise solution, Justice Kagan might have enough votes for a categorical ban on warrantless cell phone searches.

It was during the second half of arguments in Riley, while questioning Edward Dumont (Attorney for California), that Justice Breyer first laid out the potential outcomes for both cases:

JUSTICE BREYER: So there are three possibilities: Possibility one, smartphone, no, get a warrant, unless exigent circumstances. Possibility two, yes, it’s just like a piece of paper that you find in his pocket. Or possibility three, sometimes yes, sometimes no. All right, which of those three is yours?

And of these three options, the third “middle ground” was the focus of most of the Justices’ questions. Over the course of argument in both cases, three distinct “middle ground” proposals emerged: (1) search only “pre-digital” types of information, (2) search only for evidence of the crime of arrest, and (3) conduct a manual search under immediate exigency or plain view. Of those three options, the “plain view” proposal seems more likely to unite a coalition of the Justices in both Riley and Wurie.

The First proposal, described by Mr. Dumont in response to Justice Breyer’s question above, would allow officers to search for certain types of information that were traditionally available to police officers during arrest, as compared to some as-yet-undefined “special” digital data that could be subject to greater protection.

DUMONT: Right. And my in­between rule with the explanation is that for information that is of the same sort that police have always been able to seize from the person, that includes diaries, letters, all other kinds of evidence, purely evidentiary, photographs, address books, for evidence of that same sort, the same rule should apply.

But, as Justices Kagan and Breyer quickly pointed out, that exception would swallow the rule. There are “very, very few things that you cannot find an analog to in pre-digital age searches.”

The Second proposal, discussed by Justice Scalia and Deputy Solicitor General Michael Dreeben, was that officers could search the cell phone “in order to find evidence of the crime of arrest.” This rule, adopted by the Court in the context of automobile searches incident to arrest in Arizona v. Gant, 556 U.S. 332 (2009), would limit the scope of the evidence obtained by law enforcement during the search of an arrestee’s cell phone. But Justice Kagan pushed back that this would hardly be a “limiting” principle because cell phones contain such a wealth of private data.

JUSTICE KAGAN: Can I ask you a question about that, Mr. Dreeben, because given the variety of things that these cell phones have in them, it seems as though that’s you know, it sounds good as a limiting principle, but it ends up you can imagine in every case that the police could really look at everything.

The Third proposal, presented by Mr. Dreeben during the Wurie argument would limit officers to “manual searches of the information that’s available to the user of the phone.” And this proposal is also directly related to a “plain view” rule described by Justice Sotomayor at the end of Mr. Dreeben’s time:

This thread was then picked up by Chief Justice Roberts during his exchange with Judith Minzer (Counsel for Defendant Wurie).

CHIEF JUSTICE ROBERTS: We’ve we’ve kind of gotten far afield, which I’m sure is not may not be fair to Mr. Fisher or Mr. Dumont, we’re talking about their case, but in your case why isn’t the information in plain view? It says, “my house, my home.” They look at it, that’s what they see. They don’t have to open anything.

MIZNER: They saw the words “my house.” They did have to open the phone and access the log to –

CHIEF JUSTICE ROBERTS: Sure. But I’m saying do you have you have no objection to the “my house”?

MIZNER: The “my house” words were in plain view.  And under this Court’s doctrine, that’s not —

CHIEF JUSTICE ROBERTS: I assume that that’s it says “my house” because he’s done something with the particular number.  If he didn’t, it would be the number itself that would show up, right?

CHIEF JUSTICE ROBERTS: And so would that also be in plain view?

MIZNER: The number was not in plain view

CHIEF JUSTICE ROBERTS: No, no.  But I mean, in a in a case in which the user had not coded the particular number, the number would show up, I think, right?

CHIEF JUSTICE ROBERTS: And that would be

MIZNER: And the number would be in plain view.

Under this plain view and exigency-based rule, officers would be allowed to manually inspect cell phones for recent calls, contacts, or messages, but could not gather evidence generally or download any of the phone data without a warrant. That rule would provide a basis for the Court to distinguish between the facts in Riley and Wurie. The photos, videos, and contact lists at issue in Riley were uncovered after the officers “looked through some stuff” at the station, whereas the phone number in Wurie was revealed by inspecting the contact “my house” that called the phone while it was in the police station.

Interestingly, the Justices did not appear to seriously consider Mr. Dreeben’s alternative proposal: that officers could search data stored on the cell phone, but not data stored in the “cloud.” EPIC’s amicus brief focused on this issue in particular, and argued that it has become increasingly difficult to distinguish between data stored on the phone and data accessed remotely via the cloud. Justice Kagan, in particular, keyed in on the same points in her questioning of Mr. Dreeben during the Wurie argument:

JUSTICE KAGAN: But I thought the whole ideas of smartphones, Mr. Dreeben, and increasingly so, was that even the user doesn’t know what what’s on the cloud or not.

For those who are unfamiliar with these cases, tou can also find a description of the cases with an index of the briefs and links to relevant news stories on EPIC’s webpage here.