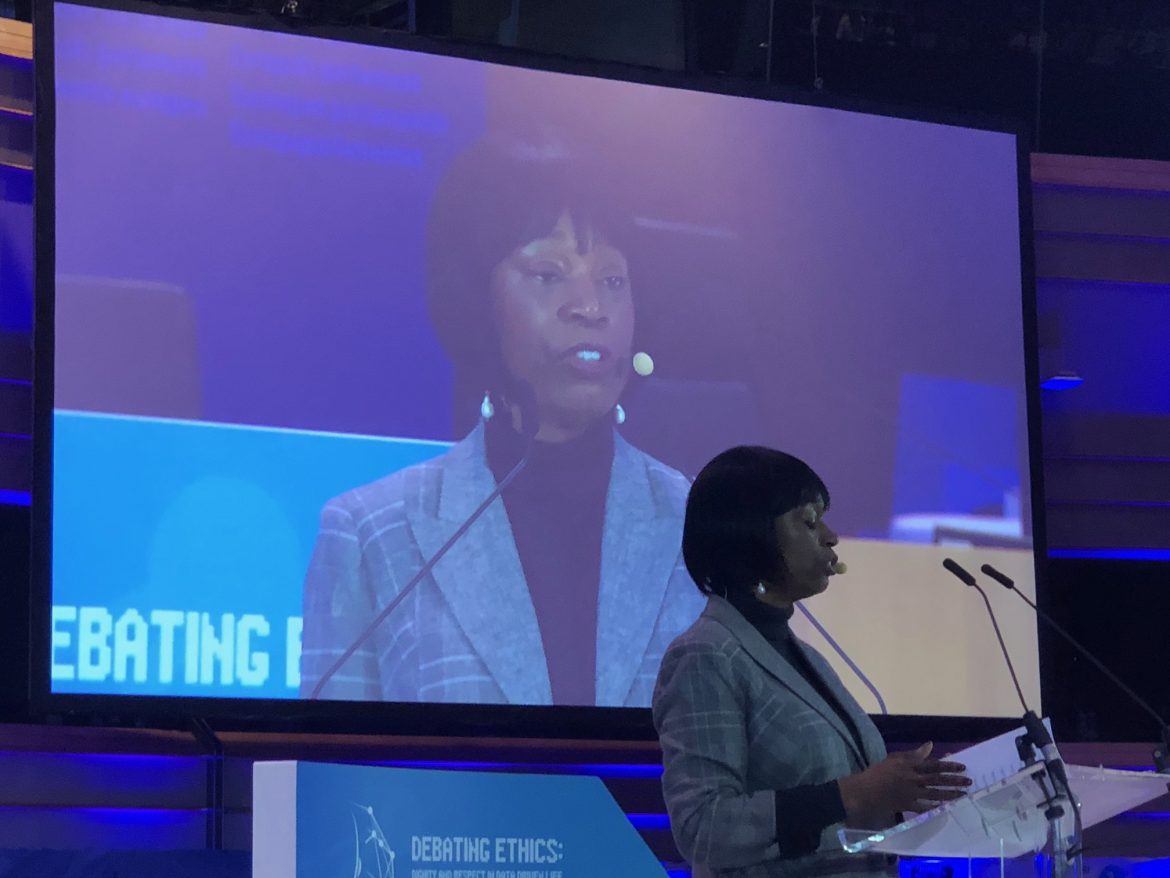 The International Conference of Data Protection and Privacy Commissioners (ICDPPC) connects 119 privacy and data protection authorities from across the globe.  The ICDPPC first met in 1970 and has since become the leading data protection forum in the world. The 2018 conference, attracted more than 1,500 participants. EPIC President Marc Rotenberg, along with EPIC Board member Professor Anita Allen, EPIC Advisory Board member Malavika Jayaram, and Apple CEO and former EPIC Champion of Freedom Tim Cook, were among the speakers at the conference.

The EPIC Public Voice Fund provided support for NGO participation this year. A record number of NGOs were expected to attend, with over 130 delegates from 85 different NGOs registered. One important point emphasized by the participants was recognition of the EU General Data Protection Regulation (GDPR) as a baseline, but also the need to think beyond it for the future AI regulation. The improved GDPR model was informally referred to as “GDPR+.” The “Universal Guidelines for Artificial Intelligence” (UGAI) were announced at the Public Voice conference. The UGAI is the first human rights framework for AI. More than 150 experts and 40 NGOs, representing 30 countries around the world endorsed the UGAI.  Among the signatories are the American Association for the Advancement of Science, the world’s largest  multidisciplinary scientific society, BEUC (the European Consumer Organization), and human rights advocate and former world chess champion Garry Kasparov.

Allen and Cook Address the Commissioners

At the larger conference, Professor Allen (@Lawprofaallen) delivered a dynamic keynote address to the entire body of privacy commissioners focused on ethics as the “basis of character and moral life.” She described law and ethics as coexisting – stating that “Ethics are respected as the ideal foundation of law and professional standards.” She recently published an essay in New Europe, “Why Ethics Now?,” discussing these points. Allen also publicly endorsed the UGAI during her keynote. Tim Cook (@Tim_Cook) was also among the list of headline speakers and called for a true evaluation of the technologies we create. “Platforms and algorithms that promised to improve our lives can actually magnify our worst human tendencies.” Cook warned. “Rogue actors and even governments have taken advantage of user trust to deepen divisions, incite violence, and even undermine our shared sense of what is true and what is false.”

Cook reminded us that, “This crisis is real. It is not imagined, or exaggerated, or crazy.” Cook endorsed the GDPR and called for comprehensive privacy legislation in the US. See full speech below.

Jayaram Speaks to Digital Dividend and Lessons from Carpenter Malavika Jayaram (@MalJayaram), the inaugural Executive Director of Digital Asia Hub, and a member of the EPIC Advisory Board, spoke to the conference about how digital technology is changing the way we behave and interact. Malavika also spoke on a panel at a side event “Lessons from Carpenter – expectations of privacy in a globalised world.” At the closing session, EPIC President Marc Rotenberg (@Marc Rotenberg) described the importance of civil society participation in the annual privacy conference. “This cannot be a conversation between only governments and industry. Democratic legitimacy requires public participation,” said Mr. Rotenberg. He thanked Giovanni Buttarelli and the Data Protection Commissioners for their support for the Public Voice and the work of civil society.

Speaking to the conference theme, Mr. Rotenberg emphasized the importance of ethics to emerging challenges in the data protection field, such as AI. He described the development of the Universal Guidelines for AI, which acknowledged current legal rights but also incorporated ethical guidelines from computer science and human rights norms.  “Ethics tells us not only what the law is, but also what the law should be,” said Mr. Rotenberg.

For more news on the conference, follow EPIC on twitter @EPICprivacy. See more about Tim Cook’s, EPIC Champion of Freedom Award in 2015.  Learn more about Professor Anita Allen, a member of EPIC’s Board of Directors, and author of several books, including Privacy Law and Society.